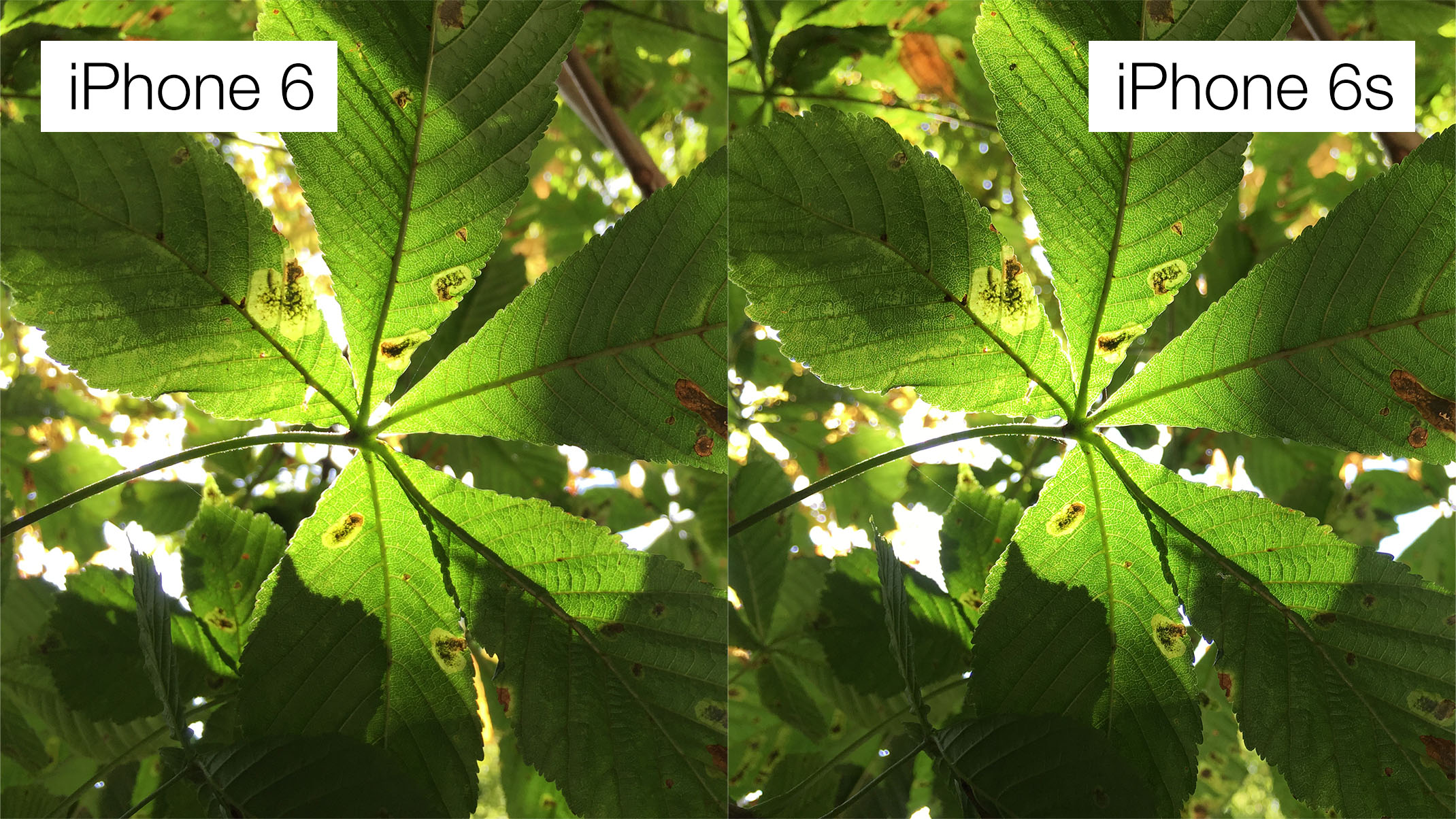 Macworld asked me to write about how the iPhone 6s compares to the iPhone 6 considered solely as cameras. In other words, how much better is the 6s’s camera than the 6’s?

It was a hugely fun thing to write. Well, it was logistically a complete pain in the arse as it had to be turned around quickly, and on a weekend when I thought I’d be able to give my wife a break from wrangling our sometimes fractious baby daughter I was instead haring all over town taking photos then locking myself away for snatches of time in my office to try to analyse the shots and marshal my thoughts into a coherent narrative.

But when I eventually turned in at 2am early on Sunday morning, having completed a first draft, I was buzzing. It’s a really simple thing, but it was so lovely to have the opportunity – thanks, Susie! – to set out with an open mind, take a bunch of carefully-planned sample shots and footage, and then sit down, sort through it all dispassionately, and have the rewarding experience of seeing original conclusions and judgements emerge which I’m confident in and which I think are genuinely useful.

It’s quite long – and boy, do I fret about writing flabby prose; I hope my editor friends won’t be secretly thinking I could easily have cut it in half – but there’s a tl;dr version at the end if you want to skip straight to that. Set aside 10–20 minutes and have a read; I’m proud of this one.

I am sometimes quite dim, and so it took me a while to realise that Apple’s focus on the strength of the “7000 Series aluminium” used in the iPhone 6s was probably tacitly – not explicitly; never explicitly – addressing ‘bendgate’. This, the discovery shortly after launch that the iPhone 6 could deform with enough pressure applied along its length, was mostly a PR problem for Apple rather than an actual problem for its customers, but that’s why using PR to counter it this time round makes sense.

This, though, prompted another thought, building on what John Gruber recently wrote about how the every-two-years ‘s’-generation iPhones are the ones to buy, and it’s this: s-gen buyers effectively have had their phone’s design beta tested by millions of users, over trillions of hours of use, generating tens of thousands of data points in Apple’s support infrastructure, and this means that Apple has the opportunity to correct flaws in the original, non-s variant of that design.

You could argue that there shouldn’t be flaws in the first place, and you can be damned sure Apple tests thoroughly, exhaustively, both in the real world and with mechanisms designed to mimic extended periods of use, but I suspect there’s just no substitute for millions of users actually, really, properly using a product when it comes to revealing areas of weakness.

Here’s another example: some iPhone 6 users have been affected by the front-facing camera gradually moving – or presumably more accurately, being knocked and nudged – off centre, revealing a (harmless) crescent moon shape off to the side. That’s exactly the sort of thing that I can imagine easily fails to surface during internal, prerelease testing, but now Apple has enough reports of it, it can in theory use that information to correct it with the iPhone 6s.

This whole theory is bunk, mind you, if the lead times for design and manufacture are so short as to make it impossible to incorporate changes within the annual cycle Apple releases phones on. I just don’t know; it seems really short to me, but, from a position of ignorance, it strikes me as not out of the question, if a revealed flaw is sufficiently severe.

Imagine you were immensely rich, and you lived a hundred years ago. Imagine you wanted to be able to know, at a glance, at any time, how immensely rich you were – your net worth. I could be wrong, but I think it probably couldn’t be done; merely gathering never mind collating the data would take, what, hours? Days? Imagine you wanted to have that data available on your wristwatch. Imagine the infrastructure that would have to be developed, never mind the mechanical machinations involved in displaying it. Your immense wealth literally – probably – couldn’t buy you what you wanted.

If today you are immensely rich and want to know, at a glance, at any time, how immensely rich you are, you could have a developer create a bespoke Apple Watch app just for you that gathers information in real time, collates it, and presents it as a complication.

And the thing is that you don’t even have to be immensely rich. If you have a strong and unique enough need for a small snippet of information to be always updated and always available, it’s not ridiculous to commission a dev to create a Watch app for you that does so. What a hundred years ago no amount of money could buy, today a small amount of money can easily buy.

Watching – lol – a TV programme last night, I clocked – lol – that the presenter was wearing a regular watch. And in the way of things, like when you say a word over and over and it starts to sound utterly alien, my mind started thinking how odd it was that we spent hundreds of years with the time – and only the time – strapped to our bodies. Yes, it was and is useful, and I know the story of train travel forcing standardisation of time and so on, but it’s one of those ‘if an alien came to Earth’ things; why is knowing the exact time – for a given value of ‘exact’ – so important to you Earthlings that you strap it to your body so it’s with you at all, as it were, times?

Contrast this with the Apple Watch, which, yes, tells you the time. But also tells you if it’s going to rain, when to take your pizza out of the oven, what your friend thinks of your new haircut, where your nearest hairdresser is, when your next haircut is, and so on. It’s so much less weird of a thing to have strapped to your body, so much less weird of a thing to glance at, simply because it’s so much more capable and flexible.

(Now the phrase ‘strapped to your body’ is now starting to sound weird.)

John Gruber draws my attention to a post on Macworld by the redoubtable Glenn Fleishman wherein he tries to solve a reader’s problem about getting Finder windows to open at a consistent size and location.

I read the trick for doing this many years ago (though where I can’t remember), and it’s always worked; it’s a little simpler than the suggestion Glenn follows. (And yes, you could argue as Gruber does that the fact that no less a man than Glenn doesn’t know this suggests it’s far too hidden and therefore broken a behaviour, but I’m here to solve this problem for you rather than bellyache.)

To have Finder windows in OS X open at a consistent size and location, open a new Finder window, resize it to how you want, then, and this is the important bit, close it again before you do anything else. Just open the window, resize and reposition it, then close it. Don’t click icons inside it. Now, subsequent new windows will be at the same size and position.

Here are a couple of bonus tips I always use. The first is that as well as resizing and repositioning the Finder window itself, you can also change the width of the Sidebar and the columns in column view – I always default to column view – and these will be remembered too. The Sidebar will actually snap to width of the widest thing listed, which can be handy. To adjust the column size, hover over one of the vertical dividers and drag; so far, so obvious. The extra little tip is that if you hold ⌥ then all columns resize at once. You can do both these adjustments on the new window you open above to set the default size and position.

Finally, remember that you can set which folder a new Finder window opens with in the General tab of Finder’s Preferences. I have this currently set to my main work folder, containing sub-folders for all my clients, but when I worked on a magazine I had it set to a particular folder into which I’d drag aliases for all the current stuff I was working with. Some aliases – to folders on the server, say – never changed, but some were replaced every month as I’d turn my focus to a new issue. This approach meant – and means – that whenever I hit ⌘N in Finder, I get immediately shown the most relevant current stuff, and because I’d have followed the earlier advice above, the window is in the right position, is the right size, and is perfectly centred.