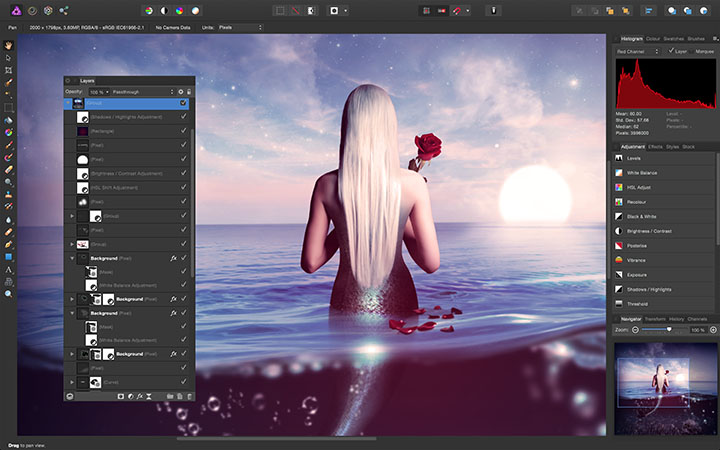 This morning I tweeted to congratulate Serif on the release of Affinity Photo, its new image-editing app which joins the vector app Affinity Designer (already out) and DTP app Affinity Publisher (out later this year). I said, within the 140 character constraint, that the apps in the Affinity suite are genuine challengers to Adobe’s market-dominating apps, and I worried for the rest of the morning about how that comment was interpreted. Hence this post which, uh, expands on the point.

There are two things to consider here. First, are the apps actually good enough for people to consider them instead of Photoshop, Illustrator and InDesign, and second, what is the nature of the ‘challenge’?

To the first: yes, with familiar caveats. Affinity Designer, the only one I’ve used, is not merely as powerful and flexible as Adobe Illustrator is but in many ways it’s more so. Yes, there are likely edge cases where certain Illustrator features and workflows won’t be available or will be clunky in comparison, but it’s even more likely that Designer’s advantages – fast, consistent, modern and easier (for me at least) to use – will offset these for many, many people. In any case, Serif is iterating hard. If you’re familiar with Illustrator, there will be a slight learning curve in switching to Designer, but the app is generally so much of a delight to use that not only will you grasp it quickly but you’ll also wonder why Adobe didn’t do things like that years ago. Serif is fortunate that they put themselves in a position to start with a completely blank slate in creating this fully integrated suite, instead of, as with Adobe, having to deal with millions of lines of legacy code which, crucially, often originated in different companies and had to be made to feel and behave like a suite – and the effect is wonderful.

The other caveat is one we know well from the Office story; in commercial workflows, consistency of tools and file formats for interchange are important, and you might suggest that while one-man-band illustrators or small studios could make the switch easily, it’s much harder for full-scale agencies and publishers. And this is likely true, but for far fewer cases than you might expect, in part because the native formats for the Affinity suite are widely compatible, but also because Serif knows this is a problem and puts a lot of stock in robust import and export of even the Adobe formats such as .psd and .ai. Still, while I haven’t done enough in-anger work to know empirically, I wouldn’t be surprised to learn that busy, fecund companies ran into a few small but important glitches in fitting into the Adobe-dominated industry workflows if they switched to Affinity.

(Of course, plenty will start with Serif’s apps rather than switching from Adobe’s, and there’s a fair bit of friction involved in getting people convinced they should even entertain switching if they’re comfortable in Creative Cloud.)

My second point, though – what do I mean by saying Serif challenges Adobe? – is the one that worried me more.

I’m always sceptical when someone claims an app can challenge an incumbent. It’s hard to do, in part because of the reasons above, and also because usually there’s a good reason the incumbent is the incumbent. It takes a lot of hard work, fresh ideas and money, and a long time, to challenge one. Usually the new app just isn’t very good, whatever the PR exec tells you.

The Affinity apps actually are very good, and they definitely can challenge Adobe’s. Be careful how you define ‘challenge’, though. I don’t think it’s likely we’ll see Serif any time soon doing to Adobe what InDesign did to QuarkXPress; the current Adobe apps aren’t as stagnant as XPress was then, and nor is Adobe as arrogant as Quark at the time. That’s not what I mean. You don’t have to vanquish a competitor to be a success; this isn’t a zero-sum game.

Affinity Designer, though, absolutely and completely is a viable, pro-level alternative to Adobe Illustrator. It’s not a ‘have-made-an-app-that-can-draw-vector-shapes-and-lines-so-ship-it!’ effort from a lone developer. It’s not a weird open source excretion, powerful but ugly and opaque. It sprang fully-formed, mature, polished and easy to use, into existence. Indeed, it’s not just an alternative to Illustrator, I find it faster, easier and more pleasant to use than Illustrator. I expect the same is true of Photo and will be true of Publisher.

The first time I met with Serif to talk Affinity Designer before its launch, I confess my sceptic-o-meter was registering high. This was an old company I associated, fairly or not, with cheap PC software found in those big bins of £5 CD-ROMs in Tesco or given away on magazine coverdiscs. But I sat in the meeting room and went from scepticism to surprise to interest to amazement to excitement. I came out a convert and walked round the office telling people how awesome Designer was.

The app itself, though, was just part of it. I’ve met plenty of software bosses, and have come to expect either greasy, unpleasantly macho douchebags who might as well be selling fish fingers for all they apparently care about the product rather than the company, or technical neophytes who you suspect can’t even use the software never mind answer any vaguely technical question about it. Neither was true of Serif’s managing director, Ashley Hewson. He was clearly wildly proud of and excited by what they were doing, and could talk both knowledgeably about the products, and with frankness about strategic plans and business.

Serif also earned Brownie points with me for bringing along lead developer (technically, Head of SerifLabs) Tony Brightman, a man whose passion and pride shone like a beacon, and who with a little coaxing would go into delighted detail about why this works like that and why it’s important that this does that.

The vibe I get off the folks I talk to there isn’t the shellac of professional, because-I’m-being-paid-to excitement; it’s the real deal. They’re making all sorts of decisions – cheap but sustainable pricing, no subscriptions, commitment to upgrades, no bolt-on cloud service because we’ve all got Dropbox, right? – that serve the customer first, and they seem so very happy to be doing so.

I can root for Serif and I can root for Adobe. Inertia and familiarity, having been using Photoshop since I got 3.0 bundled with a SCSI scanner when I was a teenager, will keep me using Photoshop for a long time, and it’s important I note that it is still the pre-eminent image manipulation tool for good reason.

It’s rare that I can be so completely positive about a company and its products, but I am here. I encourage you to check out Designer and now Photo – the latter of which, as I write, has introductory launch pricing of £30/$40/€40, 20% off – and challenge you not to be as excited as I am about these products and the company that makes them.

They’re doing things right. They’re bona fide. They deserve every success; whatever the company’s ambition in the industry, I hope the market will reward such customer-centricity, quality and heart.