My new Think Retro column for Macworld is live, all about the box – yes, the box – one of my Newton MessagePad came in. 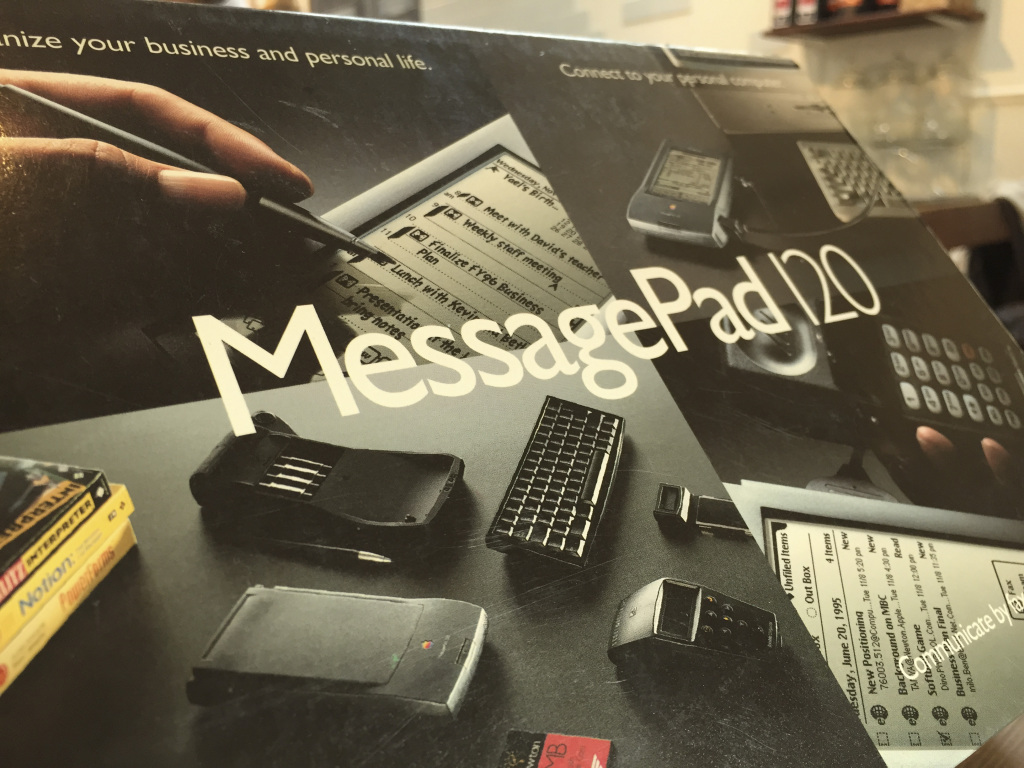 For a child of the ’80s like me, that style of photography—moody, low-lit, with shafts of light picking out form and texture—is still desperately exciting. And even as a kid, I was excited about the idea of working, of business, of being productive, so the kind of language and lifestyle you see in the pictures was terribly beguiling. (I’d like to blame the ’80s for this too, with its emphasis on self-improvement and free market economies, but maybe I was just a weird kid.)

Maybe everyone knows about the historical context in which packaging took on a marketing role, but I didn’t when I researched it for an essay when I was at university, and it still fascinates me today. macworld.com/article/2851994

For my second Think Retro column, a guide to opening ClarisWorks documents (after I’ve fanboy’d about it for a while) – and why you might want to.

No matter how much nostalgia we have for ClarisWorks, mind you, often what we value are the things we produced using it rather than the software itself. Happily, all your work and fun stuff isn’t lost, so long as you can mount whatever discs or disks you have it stored on. When I did this I found, amongst countless other things I didn’t even know I’d forgotten, my wedding vows, the start of a long-abandoned novel, and this, a letter from when I was at college, written to Macworld.

My TechRadar column this week is on the inherent uselessness of a public-voted star ratings.

The fault isn’t really with the system, though, but with people. How else can you explain the 4.9/5 rating the first picture the Philae lander sent back from the surface of comet 67P currently has? What kind of towering arsehole looks at that picture – a picture taken 316 million miles away by a probe we launched 10 years ago and which landed on an object travelling at more than 30,000mph – and rates it anything other than five stars?

I took most of the photos for the first instalment of my new Think Retro Macworld column on my iPhone 6. They would be better with an SLR and a good bit of macro glass, but on a technical level they’re perfectly good enough, especially with a little tweaking in ACR.

The last shot though was taken with a Sony Ericsson W800i in 2006; it replaced the K700i I’d had before that, and I eventually replaced it with the K800i, my last featurephone/dumbphone before I got the original iPhone. The first three generations of iPhone had a camera that was essentially just another input sensor – acceptable for documenting stuff but certainly not a creative tool. They were a big step back from my Sony Ericssons.

It’s become clear over the years that the camera is the most important hardware feature to me in a carry-anywhere device like a smartphone, so it’s a testament to the allure and novelty of the iPhone that I allowed myself to suffer a worse camera for three years.

Here are some shots from my Sony Ericssons that I uploaded to Flickr; remember, some of these are shots from a phone nearly 10 years old. (The soft-focus in the second is artificial!)

I’ve long-admired Macworld in the US, so I’m honoured now to have a byline there for a new regular column, Think Retro. For my first, an indulgent pean to the rainbow Apple logo.

There’s something intensely pleasing, isn’t there, about how it’s glossy and smooth, nestled in that sea of roughly textured black plastic—a wave-polished pebble on a sandy beach.

My wife and I have formulated a little life hack over the past five years or so that helps us get shit done, makes our home and work environments more pleasant, and makes us feel good, so of course I offered to write it up for Lifehacker UK:

Most importantly, though, is the fourth benefit this approach brings: it makes you feel good about yourself. If, every day, you do one thing that needs doing but that you don’t want to do, no matter how major or minor, the sense of achievement and empowerment you get is huge. It really does have a dramatic effect on your self-esteem, never mind on your home, your job, or the rest of your life.

This was fun to write, though it has to be said my editors chose to remove some of the bits I thought were funniest so it has slightly more of an earnest tone than when I wrote it.

You’re allowed five grabs on iTunes, Microsoft; use four of them to show people doing inspiring things with your software, and you can use one to reassure people that it can still do all the dull stuff too. Even if that one page is just a blank Word document with ‘Oh, yeah, and it can do, I dunno, like, PivotTables and all that other crap you actually need for your job’ set in 36-point Calibri.

It has become de rigueur among my peers to sneer at the manipulative, saccharine and by now frankly quite formulaic ads John Lewis airs for Christmas. And if one doesn’t object to those aspects of the ads, one must at least object to how much people talk about how good they are.

There’s a quite distasteful undercurrent of snobbishness in this, as if something that is sweet and fun and maybe makes you feel a bit warm and teary is somehow terribly unbecoming, or underserving of any approbation; in the context of the old divide between high and low art, this is subterranean, and my dear, it’s an advert! How can it possibly have any soul? It’s there to sell you things; wake up, sheeple!

Fuck all that. Seriously; fuck all that. This year’s is lovely, and I think you’ll be a better, more open and loving person if you don’t join in with the fashionable wave of negativity and dismissal.

While I was rewatching it (yes, guys; rewatching it) it struck me that part of the reason it’s so strong – and why I at least bought so completely into it that the reveal at the end hit me unexpectedly hard – is that the penguin is so penguiney. It’s barely anthropomorphised at all – it’s up to us to infer its emotions and its story rather than it being heavily implied. Sure, there are hints, but the makers realised that part of the reason we love penguins so much is because of their distinctive little mannerisms and quirks; these are penguins, not men in penguin costumes.

In the last of my MacFormat columns for TechRadar, I discuss how Apple’s inconsistency in reviewing apps is retarding innovation. http://www.techradar.com/1271125